Jerome “Jay” Powell is the current head of the Federal Reserve. He was appointed the Federal Reserve Board in 2012 by then-President Barack Obama. President Trump appointed him to the chair of the Federal Reserve in 2018, and, currently, President Biden says he’ll keep Powell in that position when his term expires in February 2022. Jay Powell, as he is often referred to, is a presidential nominee that – in a time of political divisiveness – is able to garner a great amount of bipartisan support. He has worked in both the public and private sector. He is no stranger to politics, however – he served under President George H. W. Bush as a part of the Department of Treasury. Oftentimes, the only opponents to Powell are those who are considered more progressive Congresspeople.

Jerome Powell was one of five children born to his parents, Jerome and Patricia Powell. Born in Washington, DC, Powell seemed destined for a life in politics, but he would spend some time in the private sector as an investment banker as well as an attorney.

Powell’s life was likely greatly influenced by both parents. His interest in the economy was likely fostered by his mother’s profession as a mathematician. Powell would follow in his father’s professional steps as the elder Jerome Powell was also an attorney.

Powell dabbled in politics even as a young man. He was a legislative assistant to Senator Richard Schweiker (R-PA) in 1975.

Although Powell describes himself as a Republican, he is an individual that is able to garner bipartisan support. He worked under the presidential administration of George H. W. Bush, but he was nominated to a Fed Reserve position by Barack Obama. He worked under the Trump Administration, but he has also received support for continuing his position under President Joe Biden.

Powell married Elissa Leonard in 1985. The couple have three children together: Sam, Susie, and Lucy. The Powells make their home in Chevy Chase Village, Maryland.

Based on public filings, Powell has a vested interest in parochial schools. He established the Center City Consortium, which is sixteen parochial schools in the indigent areas of Washington, D.C. He has also served as a board member to multiple educational organizations as well as a few charities.

The latest financial filings of Jerome Powell show his net worth to be between $20 and $55 million.

Powell’s annual salary is $203,500. However, Powell spent many years working both in the private sector as well as in public governmental positions. Most experts cite his years working at the Carlyle Group, a private equity firm, as the time period during which Powell earned most of his wealth.

Powell also served as a visiting scholar at the Bipartisan Policy Center in Washington, although any earnings from this position have not been disclosed.

Coupled with Powell’s earnings and possible pensions while working as a public servant, Powell’s net worth is tough to correctly estimate. He has also been a member of multiple board positions for charities and schools; it is unknown if he received compensation for these positions.

Powell’s first employment was with a law firm, Davis, Polk, and Wardwell. After two years, he left to work at Werbel & McMillen.

By 1993, Powell took a managing director position at Bankers Trust, where he would remain for two years. Controversy at the bank ensued due to high-risk investments, and Powell would leave in 1995 to take a position at Dillon, Read, and Company once more.

In 1997, Powell worked at the Carlyle Group, where he was a partner. He worked at two other financial institutions between 2005 and 2010.

Powell’s last private position was at the Bipartisan Policy Center, and this likely assisted him in becoming accepted as a bipartisan financial expert. He worked with Congress regarding the debt ceiling, advising prior to the crisis over the debt ceiling in 2011.

While working at the Bipartisan Policy Center, Powell earned a salary of a mere one dollar per year.

Powell’s connections at Dillon, Read, and Company would serve him well and introduce him to his first role at the U.S. Department of Treasury. Powell’s former chairman at Dillon became the Secretary of the Treasury, and Powell was nominated to the position of Under Secretary of the Treasury for Domestic Finance by then-president George H. W. Bush. Powell would serve in this public position from 1990 to 1993.

During his time in the U.S. Treasury, Powell was involved in investigating the Salomon Brothers.

In 2011, Powell would see himself working with the government once more. President Barack Obama nominated Powell to the Federal Reserve Board of Governors, and Powell was chosen on the basis of his bipartisan support. As Powell is a registered Republican, Obama’s nomination of Powell was historic; no other president had nominated someone of the opposition party to a federal position since 1988. Obama would re-nominate him for the position in 2014 (Powell was originally nominated when the previous board member had resigned).

Powell was confirmed with an overwhelmingly bipartisan vote of 67 – 24. At the time, he was expected to sit on the board until 2028.

Powell has always been an economic expert who is considered methodical and without party prejudice. He often presents a common sense approach to American financial issues.

In 2017, President Trump nominated Jerome Powell as the chair of the Federal Reserve. He broke what had become a tradition of nominating someone from the opposition party that Obama initiated.

The Senate Banking Committee took up Powell’s nomination, and he was overwhelmingly approved by said group. The only “nay” vote belonged to progressive Elizabeth Warren (D-MA). Thus began a time when the only bipartisan support that Powell did not receive came from more progressive Congresspeople.

Powell has been the Federal Reserve Chairman since February 2018. When President Biden took office in January 2021, he decided to keep Powell in the position that he executes so well.

Powell is known for his unbiased approach to the American economy. In 2018, he introduced a practice of quantitative tightening; by contrast, he has also used quantitative easing as well.

Axios has stated that when Powell took over in 2018, the economy was stable. It was at this time that Powell instituted quantitative tightening. The Fed raised interest rates, and the Fed began reducing its asset portfolio (which would take place over a four year period). At the time, President Trump showed his disapproval of the initiative as did many in the public. However, Powell stood his ground on the matter.

At the time, Donald Trump publicly mentioned he was having “second thoughts” about nominating Powell.

By December 2018, the market had become quite volatile and financial assets had declined. However, by early 2019, Powell began to move toward quantitative easing, although his critics said that the move didn’t come quickly enough.

By the end of 2019, the country was energy independent, and Powell announced that the Fed balance sheet would expand once more. This had a positive effect on the economy.

However, by early 2020, the pandemic began in America, and the Federal Reserve was expected to respond so that the economy didn’t go completely belly up. The Fed expanded its balance sheet, similar to previous activities. It also resolved to be careful regarding raising interest rates. Powell’s actions during the pandemic earned him a great deal of bipartisan support.

Today, Powell faces surging inflation rates. The Fed is looking to raise interest rates during 2022. True to his typical conservative and methodical nature, Powell has said that the way the Fed reacts to inflation must “humble and nimble.”

Powell is currently serving a four-year term as the chairman of the Federal Reserve. 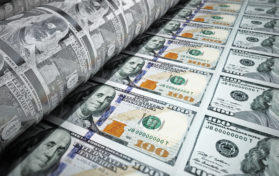 Recently, Kenneth Rogoff made his views known about the predicament in which the United States finds itself. As an economist…