The GOP has spent the time since the 2020 election planning ways of changing voter laws. Michigan has become the key battleground among politicians and political experts, with the state looking to introduce new voter identification laws. The problem facing the GOP is the incumbent Michigan Governor, Democrat Gretchen Whitmer. Despite a voter identification bill passing the State Senate, Gov. Whitmer used her veto to end the passage of the Bill at her desk.

The Governor’s veto on the legislation was not expected because the Bill had received bipartisan support in both State houses. Several County Clerks have expressed their support for the legislation and believed it would improve security. Following the fiery end to the 2020 Presidential Elections, Republicans have made voter identification laws a key point of their political strategy.

The legislation had focused on the removal of deceased voters in the lead-up to elections. The support of the Republicans had allowed the legislation to pass through both Houses and require an investigation into the citizens included on voter registration lists. Deceased voters would need to be removed from lists within 100 days of an election filing being made. The argument of some Democrats against the introduction of the voter identification legislation stated living citizens should be encouraged to vote. Focusing on the deceased voters of Michigan has been seen by Democrats as looking in the wrong area for voter ID improvements.

In contrast, Republicans claimed they had the right to tighten security around elections in the U.S. Senator Ruth Johnson sponsored the new legislation and believed it could have increased the trust in elections among all citizens. Sen. Johnson explained the Governor’s veto had left those concerned about election fraud feeling disenfranchised.

Ingham County Clerk, Ruth Ingham, believes Gov. Whitmer knows the GOP has made election administration a political topic and is refusing to become involved in the current situation. Ingham is a former Democrat lawmaker and believes the Governor was within her rights to veto the legislation. So far, Gov. Whitmer has refused to explain why she vetoed the new legislation. However, earlier in the year, Gov. Whitmer explained she would veto any attempts to introduce restrictive voter legislation in Michigan.

The concern among Democrats is that new legislation will limit attempts to register new voters across the state. Democrats in Michigan have argued the runup to any election should focus on encouraging as many people to vote as possible. Republicans believe averting any future over fraud is vital to ensuring a repeat of the 2020 elections does not take place. According to a press release issued by Michigan Attorney General Dana Nessel on October 11, three women have been charged… 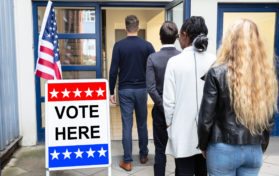 Non-citizens to Vote in NYC Elections?

Since New York has proposed the allowing of non-US citizens of the city to vote in local elections, many have…