When Joe Biden announced that he would make the COVID-19 vaccine mandatory for federal workers, as well as numerous Americans employed in the private sector, a backlash ensued. This backlash included a number of lawsuits being filed against the Biden Administration, protests against the mandate, and a dip in the approval polls of President Biden. At present, one court in Louisiana granted a stay in the mandate and another backed the stay. However, one court has given the Biden Administration the go-ahead on the mandate regarding companies employing more than one hundred people.

Multiple government agencies have reported issues with getting their employees vaccinated; while most have complied, many others have refused. Those who have refused may have also walked off the job. The United States Post Office is one of the latest governmental agencies which is expressing concern regarding the vaccine mandate for its employees.

The Deputy Postmaster General Douglas A. Tulino sent a letter to OSHA (the Occupational Safety and Health Administration) expressing his concerns regarding the impact of the vaccine mandate. Employees of USPS will have the opportunity to present for weekly testing should they choose to refuse the vaccine, but, even Tulino recognizes that this could present a problem for one of the country’s largest agencies.

Tulino says that the mandate, even though it does allow for weekly testing in lieu of the vaccine, is likely to result in the loss of many employees. Tulino claims this could be the result of employees leaving voluntarily or by being disciplined. Tulino pointed out that many of his employees are still temporary employees (left over from the holidays as well as substitute rural mail carriers), it is possible these temporary employees will simply walk away rather than subject themselves to the mandate.

Tulino’s letter went on to say that the USPS holds an essential place in America, and the agency is seeking “temporary relief from the ETS (Emergency Temporary Standard) and maintenance of the status quo on an interim basis.”

In addition to the relief requested, the United States Postal Service asked that OSHA extended deadlines for complying with the mandate by at least 120 days. Tulino also asked that the USPS’ compliance be suspended pending the courts final rulings on the legality of the vaccine requirement.

The mandate is set to become effective for the USPS on January 10. However, OSHA has said that it will not begin to issue any violation citations or fines until February 9. However, Tulino maintains that it is unclear if the USPS will be able to comply at that time. The USPS has said that it will continue to enforce the existing COVID-19 mitigation program already in place that is intended to protect both customers and employees. 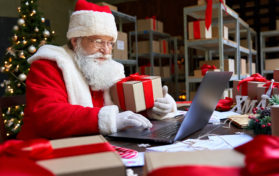