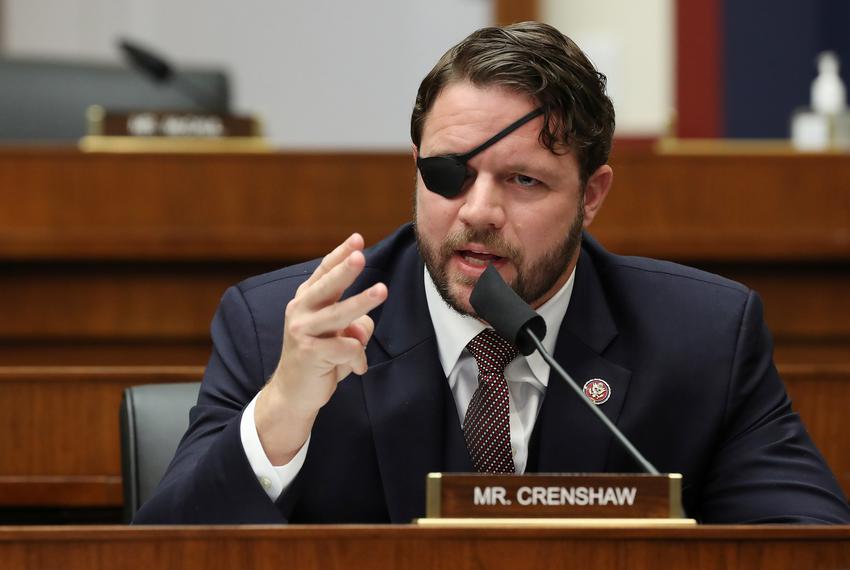 Dan Crenshaw (R-TX) is a United States Congressman and a former Navy Seal. Crenshaw represents the Second Congressional District of Texas, a position he has held since 2019. He is a conservative Republican, and he is a frequent guest on a wide variety of cable news shows.

Crenshaw was initially commissioned into the United States Navy; he was a part of SEAL Team 3 in Afghanistan. While in Afghanistan, Crenshaw was wounded as the result of an IED and lost his right eye. Crenshaw succeeded Ted Poe, who retired before the 2018 elections.

Daniel Reed Crenshaw was born in Aberdeen, Scotland, but grew up in Katy, Texas. His father, Jim, was a petroleum engineer who usually worked outside the United States. Because of this, Dan Crenshaw would live in both Ecuador and Colombia. He would become fluent in Spanish as well as English.

Dan’s mother died of cancer when he was very young, only ten years of age. Very little has been publicized regarding Dan Crenshaw’s mother. Dan recalls that he and his mother were close, and that even at a young age, Dan was aware that his mother was taking treatments for cancer.

Dan and his family moved to Katy, Texas during the late 1980s. He would attend elementary school near Houston, Texas.

Dan has also shared that he had as normal a childhood as any child could, even with his mother’s illness and his father’s employment across the globe. He speaks of attending football games at the Astrodome as well as playing basketball with other neighborhood children.

Some have questioned Dan Crenshaw’s nationality due to his birth in Scotland, but he is officially an American citizen. He also shared that he always knew he wanted to be a member of the military, even before his mother became ill. Crenshaw credits some influence in that of a former childhood neighbor, a man named “Buzz.”

Crenshaw says that, at that time, Buzz was the embodiment of a SEAL. He relates that Buzz shared many stories of his missions, and, even now, Dan isn’t sure what was fact or fiction regarding the tales.

When Dan’s mother passed away, he and his family moved to Ecuador for a year, but they would eventually follow his father’s work to Colombia.

Dan Crenshaw would attend school in Colombia; he would graduate from the Colegio Nueva Granada, which was located in the city of Bogota.

Once Dan graduated from high school, he would return to America full time. He would enroll in Tufts University, which is a private university set in Massachusetts. Dan would pursue a degree in International Relations as well as a minor in physics.

He would graduate from Tufts University in 2006 after earning his Bachelor of Arts in both of the aforementioned areas of study.

Crenshaw joined the Naval Reserve Officers Training Corps while he was still enrolled at Tufts. He was commissioned into the Navy after his graduation in 2006.

In 2016, the same year he returned from the service, Crenshaw married Tara Blake. Crenshaw is a Methodist by faith.

Dan Crenshaw has a net worth of $2.1 million.

Dan has made a great deal of money from book royalties. His book, Fortitude: American Resilience in the Era of Outrage , was on the New York Times best seller list for some time.

He has also earned money regarding advances for his writings from two different companies.

Crenshaw served an amazing five tours while still a Navy SEAL. He was deployed initially to Fallujah in Iraq. There, he was a member of SEAL Team Three. He would also be deployed to Afghanistan and other areas involved in the War on Terror.

Crenshaw was on his third tour of duty in Afghanistan in 2012 when an IED (improvised detonation device) was detonated near his unit. This is the explosion that injured his right eye permanently. Crenshaw would need to have surgery to save the sight in his left eye. Today, Crenshaw famously wears an eye patch on his right eye. Crenshaw was in the Helmand Province when the IED went off.

Amazingly, Crenshaw would return to his service once his remaining eye had healed. He would serve two more tours of duty – one in South Korea and the other in Bahrain. He continued his military career for four more years after his injury; only receiving a medical retirement in 2016, just two years before he would campaign for his seat in the United States House of Representatives.

Earlier this year, Crenshaw began to have issues with his left eye; the retina was threatening to detach, meaning possible blindness. He underwent successful surgery, and he spent at least one month recovering from the procedure.

Crenshaw has won many honors for his military service. He won two Bronze Star medals. One of these medals has a “V” device, which indicates valor in a leadership position when combating the enemy.

Crenshaw has also earned a Purple Heart. He was also presented with the Navy and Marine Corps Commendation Medal; this medal also denotes a certain amount of valor with which Dan Crenshaw served.

Dan has worked as a military legislative assistant under Pete Sessions.

In 2017, Crenshaw announced he would run for the Congressional seat that Ted Poe, who had represented the 2nd Congressional District of Texas, would retire and vacate. Poe’s district included Houston, where Dan grew up.

Crenshaw’s platform included immigration and border security; however. Crenshaw has become an outspoken advocate of conservative principles chiefly associated with the Republican Party.

Ironically, Crenshaw was not initially supported by Senator Ted Cruz of Texas, nor did he have the endorsement of the Texas governor, Greg Abbott. Crenshaw has also been a loyal ally of former President Trump, but, in 2015, he was openly critical of many of Trump’s political gaffs. Crenshaw’s critics tried to tie him to more progressive politicians such as former President Obama and Senator Bernie Sanders. Eventually, Crenshaw would be endorsed by Senator Tom Cotton, which garnered him a great deal of conservative Republican support.

Crenshaw has gotten much national attention; he is a regular guest on multiple Fox News talk shows. He also responded in a rather effective manner to a Saturday Night Live skit in which comedian Pete Davidson made jokes regarding Crenshaw’s appearance. The following week, Crenshaw would appear on SNL alongside Davidson on the “news” segment of the show. Davidson apologized for his comments, and Crenshaw accepted. He also used the time to speak out on veterans’ issues.

Crenshaw was re-elected in 2020 elections.

Crenshaw is wildly popular among his party, even though some Republicans did not initially support him. Crenshaw is critical of the Freedom Caucus; a group which Crenshaw claims only attacks moderate Republicans.

Currently, Crenshaw is a member of the House of Representatives’ Committee on Energy and Commerce. He has previously served on other committees, including the Committee on Homeland Security. He is a part of the Republican Study Committee as well.

Like many of his fellow Texas leaders, Crenshaw does not support abortion. He has publicly said that he believes that life begins at conception; his platform is that each state should be able to set its own laws regarding abortion.

Crenshaw is a proponent of gun rights, but he has only received a “92 percent” rating from the NRA. Crenshaw does not support gun control measures that would include the banning of certain firearms, but he does believe in studying how red flag laws could prevent gun violence such as school shootings.

Crenshaw defended Trump’s response to the pandemic, and he has publicly said that Washington Democrats are “exaggerating the threat.” He also said that regulations put forth by the FDA were detrimental to developing reliable COVID-19 testing methods.

Crenshaw has called the Affordable Healthcare Act ” an unmitigated disaster.” He wants to see the law repealed. However, he did promote allowing Medicare to negotiate with pharmacy giants regarding prescription prices.

Politico has said that Crenshaw may often vote positively for Trump policies, but that he is not a “loyalist” of the former president. However, over time, he became one of Trump’s greatest allies in Congress.

Crenshaw will run again – provided he intends to seek re-election – in 2023.